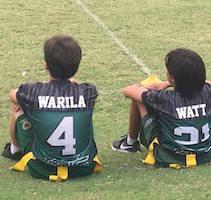 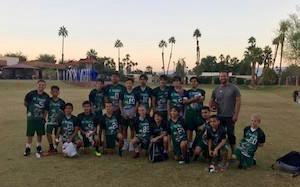 Excerpts from our conversation:

Mary: Thanks for meeting with me Justin.  You recently completed the flag football season – tell us about the team and your season.

Justin:  The St. Theresa Roadrunners has a 20 member squad from 6th, 7th and 8th grades.  The squad accepted girls and boys and 5 of our new students at STS participated.  Our schedule included games with Sacred Heart, Kings School and Raymond Cree and the season extended from September through October.


Mary:  What motivated you to form and coach a flag football team?

Justin:  I played football as a kid and loved it.  Now as a dad, I want to teach what I learned about the sport.   Playing sports in elementary and middle school is formational to participation for high school sports.  I want to help STS kids get this experience now.


Mary:  What are some of the challenges you faced as a coach?

Justin:  Well, as a coach, you have to understand and coach all positions on a team and I came from a background of playing the same defensive position my whole school career.  So, I needed to start thinking about the game differently than I had as a player.

Also, in my tackle football career, being nice and honest were not the top values.  Being tough and winning was valued, even if it meant intentionally trying to hurt my opponent.   Now, as a parent and coach, I want the kids to learn the value of working hard to build skills and be competitive but to do this in an environment that is fair and decent.

My biggest challenge was learning that I am not perfect and I make mistakes.  Players and coaches are both learning.


Mary:  Can you say more about this last comment about making mistakes and learning from them?

Justin:  Well, two examples come to mind, probably because I have been mulling both over in the post-season.

First, in one of our last games, we were tied in the 4th quarter and it was a very close, competitive game. The other side had tied a player’s flag such that it could not be pulled off and this player scored a touchdown.  We protested to the referee who nullified the goal. Now we were in overtime. I was steaming mad. Then, we lost the game in overtime.   Now, having time to think about it in the post-season, I think losing my cool cost me. There was good reason to be angry at the cheating, but staying angry made it hard to coach well under overtime pressure.    I regret not being a better role model for the players in this situation.

Second, during games, I played some players too much and other players too little.  There are many aspects to developing players including developing technical skills, work ethic, using skills under pressure and playing as a team.  At times I allowed myself to succumb to the “squeaky wheel gets the grease” syndrome. This is not good for anyone on the team. As a parent and coach, I learned (again) that I have to resist the easy path and do the right thing, which is to develop your players and be fair.  That means saying no when saying yes is easier.

Justin:  At the beginning of the season, a few girls joined the team but fairly soon after the season started, the girls decided not to play.  I feel bad that I didn’t encourage the girls to hang in there.

Author’s comment:  Flag football, like soccer, is a sport that more readily lends itself to coed play.  However, the imbalance in numbers of girls and boys playing can be intimidating and the occasional close physical contact of players can be uncomfortable.  As a school, we need to figure this one out…..maybe a girl’s flag football team? Or, on a coed team, we need to talk early and often about girls and boys playing together to increase overall understanding and acceptance.  This needs more thought as a school community because developing girls who want to play sports is incredibly important.


Mary:  What are you proud of?

Justin:  I am incredibly proud of the players.  They decided to join the team and to play flag football; they balanced homework, other school activities, other sports, family time, school time and rest.  They were committed from beginning to end: our practices were as well attended at the end of the season as they were at the start. They learned how to work as a team and knock off the negative, critical talk.  They played well and enjoyed their wins. They learned from their losses. I think they enjoyed themselves.


Author:  On behalf of parents and players, thank you, Justin.  We would not have had a team without your initiative to form and coach the Roadrunners.  You put in the hours of preparation and coordination needed to make it happen. And you showed us that it is ok to be human in all its guts and glory.  Bravo!

Sports-oriented parents:  Please think about volunteering your time to help put together a sports team at STS.  A team can be in an established league or it can be a casual (STS only) team for the benefit of STS students.  Talk with Mr. Keno or send me an email.